Control unit consists of control system, recording system, display system and alarm system. It is in charge of the entire system controlling, including the processing of every monitoring signal, the alarm signal, the linkage of the system and the auto-control of the system start-up and shutdown order. This unit contains all the necessary controlling procedures in this system, and it displays the operating conditions of the control system which includes the operating conditions of every component. If the system breaks down, the control unit will make audio and light alarm, at the same time, power will be cut off automatically, or, some troubleshoot can be realized automatically by executing the related process. For the operating condition of the device, it will be recorded and memorized, and the control unit will display the data according to the formal test requirements. Meanwhile the operators can take control and adjustment of the system through the control unit, and its control panel can realize the bidirectional interlock control both in short and remote distance.

A full-automatic backflushing filter with the filtration degree of 50 μm is set before the EUT unit and it can remove the organisms and other impurities with the diameters larger than 50 μm. This filter will start backwashing automatically without any artificial operations when the pressure loss exceeds the set value. The filter works during ballasting only.

EUT unit is composed of two parts: the electrocatalysis part and ultrasonic part. In the electrocatalysis part, special semiconductor catalyzing material of high performance is adopted, which can generate a great deal of Active Substances like hydroxyl radical. This part is of high current efficiency with a relatively long lifespan. This part can remove most of the organisms and bacteria. For the ultrasonic part, it’s a popular technology at present, as ultrasound can make high pressure instantly in partial areas and strike the cell of organisms in very short time. As a supplementary part of the electrocatalysis device, this can further improve the sterilization effects.

Sensors include salinity meter, flow meter and TRO sensor, and they can respectively measure the parameters of salinity, flow rate and TRO, in order to accurately reflect the operating status of the system in time. Adjustment will be made according to the data of sensors by the control unit for an ideal treatment effect. Salinity, flow rate and TRO are important parameters in the control process, and through calling the internal store program, the control unit can make EUT unit proceed with the relevant initial operating mode and optimum TRO operating status.

Sewage tank is part of the filter blowdown system. When the filter works, it will constantly discharge the backflushed sewage into the sewage tank according to the auto-backflushing principle, and there is a submersible sewage pump in the tank, while a liquid level sensor is loaded on the inner wall of the sewage tank. Once the liquid level is upon the set point, the submersible sewage pump will start working automatically and discharge the sewage outside the shipboard. Sewage water will be pumped out when the system stops working, in order to avoid cross contamination from residual water in the sewage tank.

Distribution board is for electric power distribution. Power supply of EUT unit, filter, control unit, sewage pump as well as the sensors in sewage tank will be distributed from here. 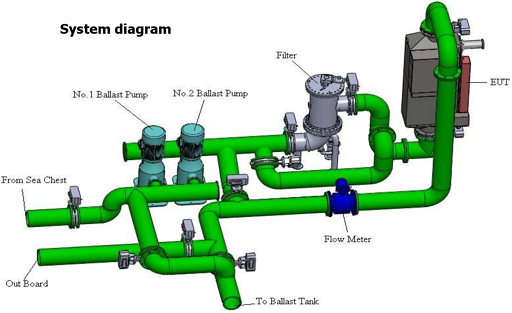